Archeology of 0 to 1: BuzzSumo breakdown

Introduction: The purpose of this research is to understand how a now well-established product like BuzzSumo was able to emerge in the market in the first years of its life. We will try to uncover the channels and the choices that were made to take the company and the product where they are today. And which of them can be repeated to bring a new product to the market.

Buzzsumo is, as they define it themselves on their website: “a cloud-based platform that helps you discover the best engagement, content, and outreach opportunities across social and search.”
Officially founded in 2014, the founders James Blackwell, Henley Wing had already started working on the idea the year before.
There is an official article from Steve Rayson “How Did BuzzSumo Achieve $2.5m Annual Revenue In The First Year?” which we will use to confirm our findings.

2012 - 2013: The beginning of everything
Let's start our time machine and go all the way back to 2012. The first shape of the BuzzSumo website is actually a simple blog by Henley Wing. He blogs about building online business and inbound strategy. There is no mention of the tool until later in 2013 when they launch the beta test period but keep the website as a blog platform choosing blogging as one way to position themselves even though there is not a lot going on in terms of blog posts. 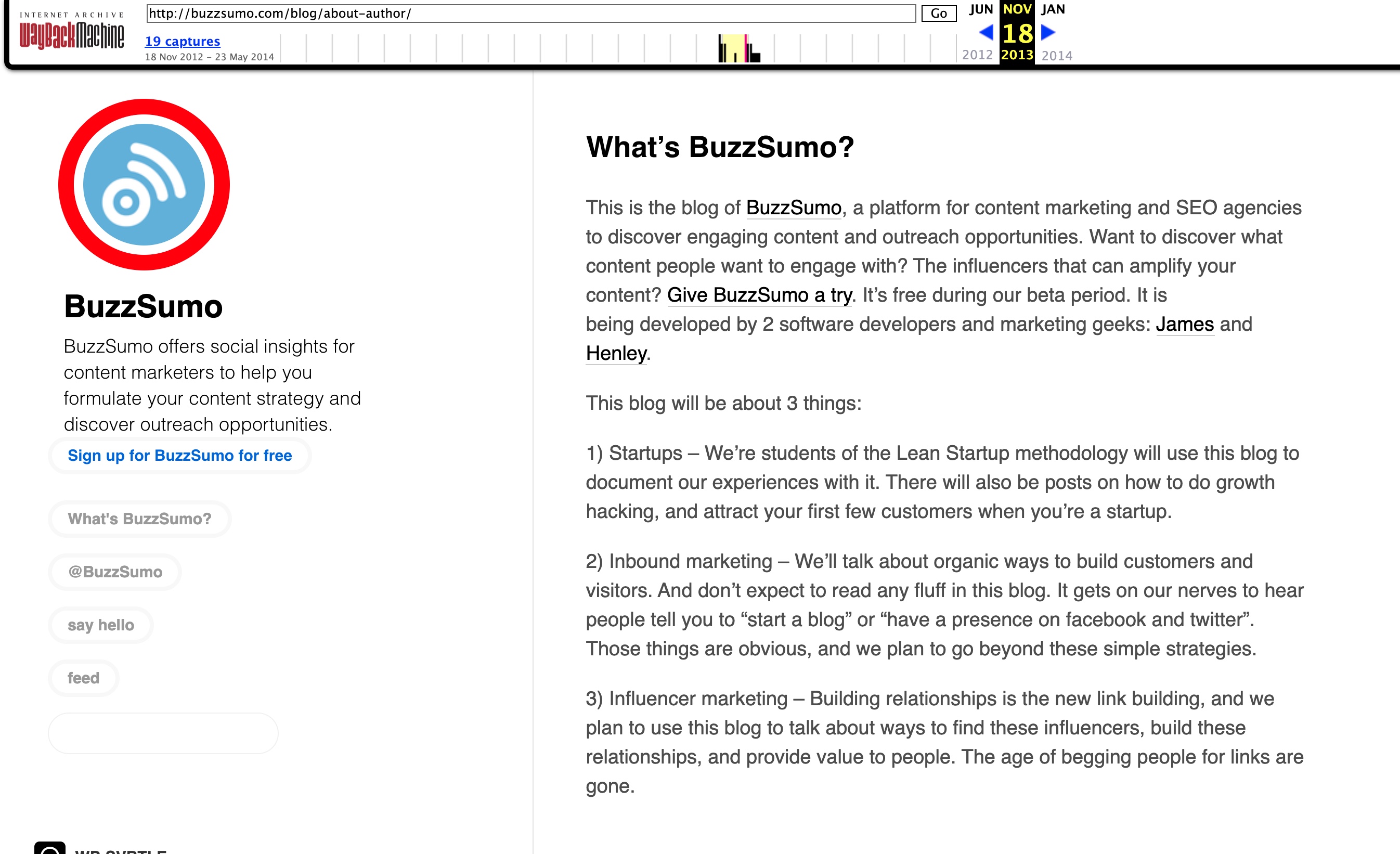 In their about page where they explain what BuzzSumo is we can notice 2 things:
1. They clearly say they target content marketing and SEO agencies, but they also blog about Startups. I assume they had the feeling the startups might find what they had to say and BuzzSumo itself interesting.
2. And they care particularly about how influencers can be used to amplify the outreach.
‍
This last point connects very well with one of the first blog posts that Henley wrote on the platform in 2012 about using the influence that micro-influencers have instead of going for big names that will cost too much or simply discard your request. The blog is still available on the BuzzSumo platform here: https://buzzsumo.com/blog/reaching-out-to-influencers/
‍
PS: There is a whole research behind the power of micro-influencers that started more or less with this article: https://www.socialfresh.com/the-influence-hierarchy/ but many others came after to prove that it is indeed a winning strategy. Another very comprehensible article here if you want to know more: https://coolerinsights.com/2015/05/marketing-everyday-influencers/

‍
By a quick search of the word BuzzSumo on Google for the year 2013, many articles by marketing or SEO bloggers covering the tool came up. Some partnerships with other tools were also mentioned i.e. https://www.buzzstream.com/blog/partner-lesson-use-buzzsumo-buzzstream.html

First assumption: What I believe is that they applied what they preached. They most likely invited micro-influencers to be beta testers and partnered with other companies in the field to get visibility. Both the approaches are mentioned in Steve’s article but he drops big names there. I doubt that in 2013 they had the support of the big companies and influencers he talks of, but who knows... Surely they were supported already by many others.

In general micro-influencers and partnerships can be a very powerful tool at the beginning of the journey. If there is a good exchange of value they are also not as expensive as people might think.

Second assumption: We will never know whether they paid the beta testers to go blog about them, but because  the exchange of value is not small I tend to think that they probably didn't. In the end by using BuzzSumo those same bloggers were getting a strong advantage over their competition. That's some value.
‍

Enjoying what you are reading? Sign up to get more breakdowns of famous products directly to your inbox!
‍
Thank you! Your submission has been received!
Oops! Something went wrong while submitting the form.
‍
2014: The fast and the furious
At the beginning of 2014 things on the blog start changing. One blog post is published every week. New names start showing up including Steve Rayson himself who is now also on board as co-founder and they have started advertising on Facebook, Linkedin and the now-deceased Google+ besides Twitter where they had been active from the beginning.
By March they are not in beta anymore but the tool is still completely free. From what I could find, they were in beta for about 6 months. On the website they made it particularly easy to try the tool if you are on their blog page. You can simply enter a word and the website will return the results.

Third assumption: This last detail makes me assume that they had already many visits coming in from the blog and wanted to make sure to turn those visits into subscribers by showing them how great the product is. This proved that the strategy of building quality content was paying back. One thing worth noticing is that they did pay attention to the UX. They are not asking to sign up which would require different steps to take, but to simply write a word and let the tool work for you.
‍ 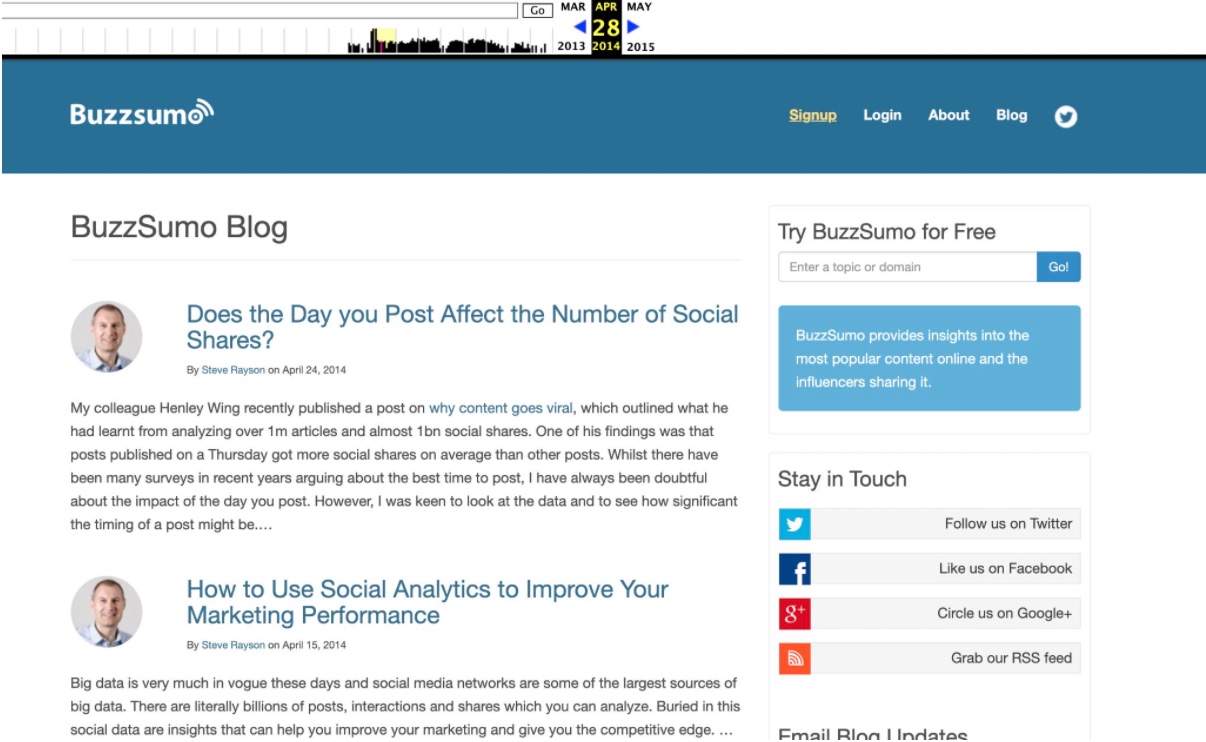 By the end of 2014, they have started their premium version along with the freemium one, settled on their message which you can read on their homepage (they changed different ones probably trying what worked best), and started having big names in their list of subscribers. I believe from that moment on their success was clear.
‍ 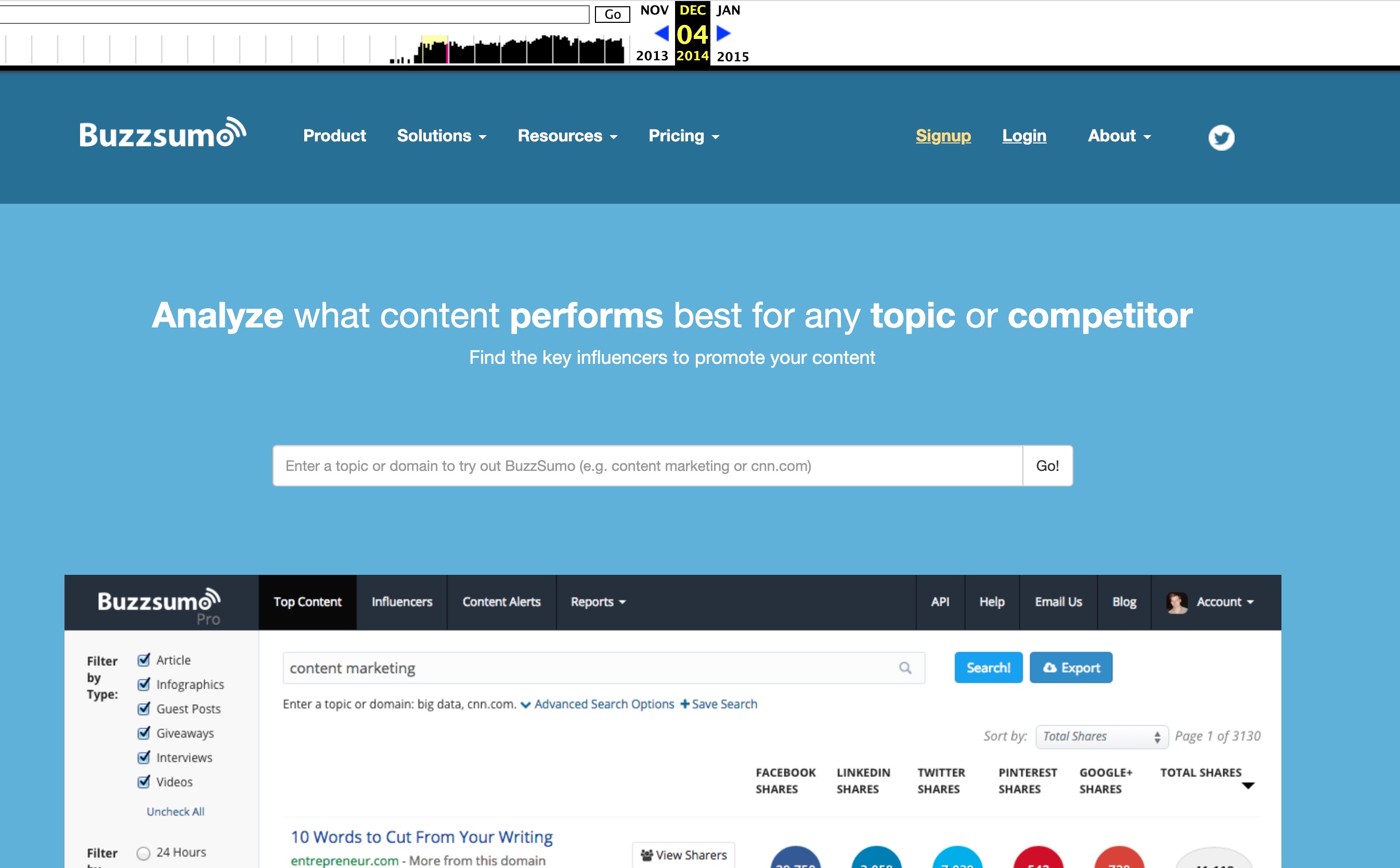 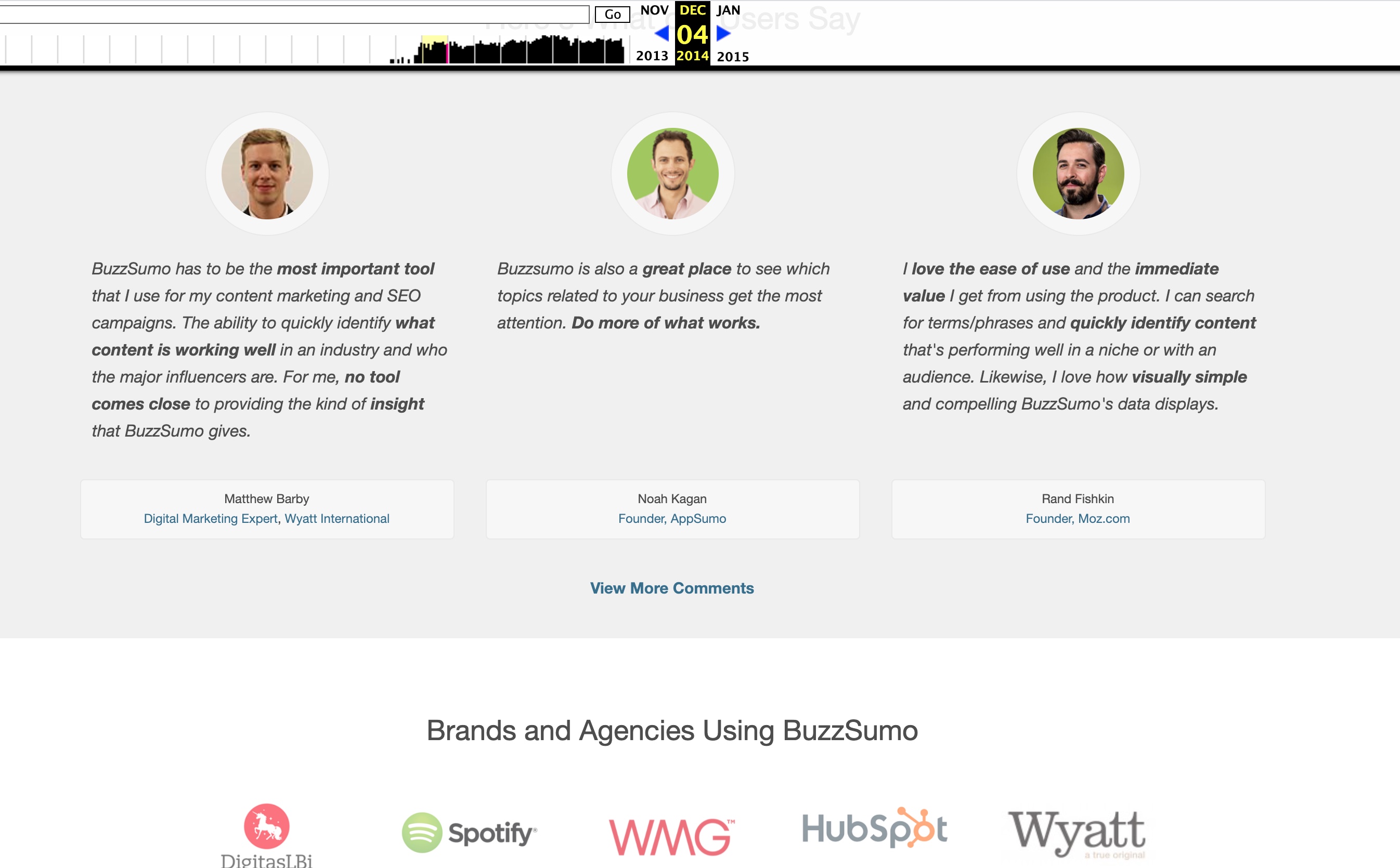 This last image shows how the search looked like. It clearly proves that they didn't wait to have a fancy slick product! They just went for it and refined it along the way.

To do some more validation, here is a screenshot from Google Trends (kindly shared by Ethan Brooks from Trends.co). You can see that BuzzSumo wasn't searched as a word until middle of 2014. This is when people started familiarizing with the brand. So I don't think building brand awareness was an initial bet for them. And we could also have assumed that from how the website looked like. Super simple and nothing too special or memorable. 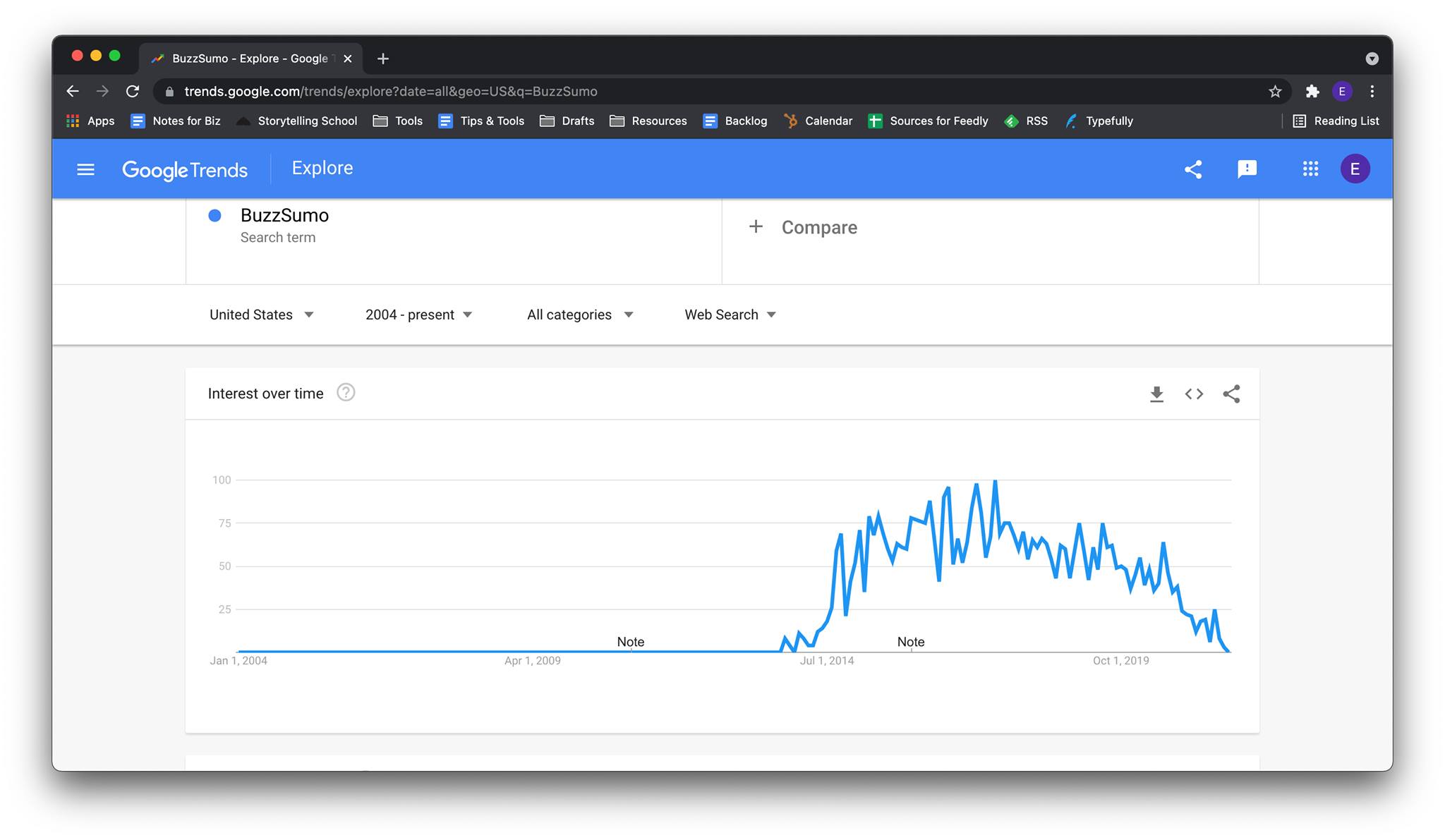 Before we go to summarize what we learned, I'd like to share one last finding which I believe is the coolest one and sort of validate everything we are reading here.
‍
‍Let's jump back in time and follow something else that happened shortly before 2014.

December 2013: The moment that changed it all

While looking at the different blog posts, I saw one about an interview with Rand Fishkin who described himself envious that they didn’t think about doing something similar with Moz.
‍ 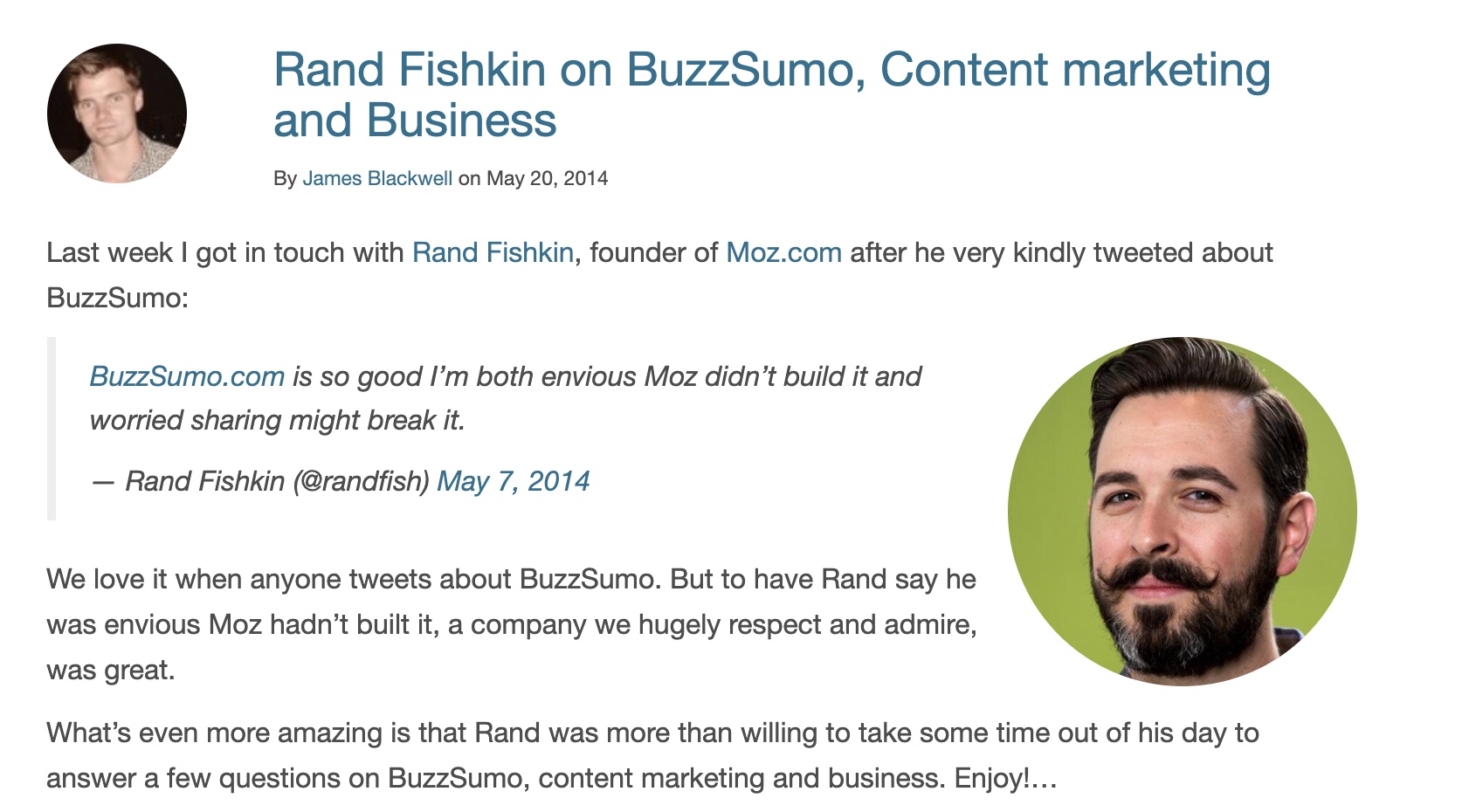 It’s a tweet, so I went and did some research on twitter and I was able to find the exact moment Rand came to know BuzzSumo 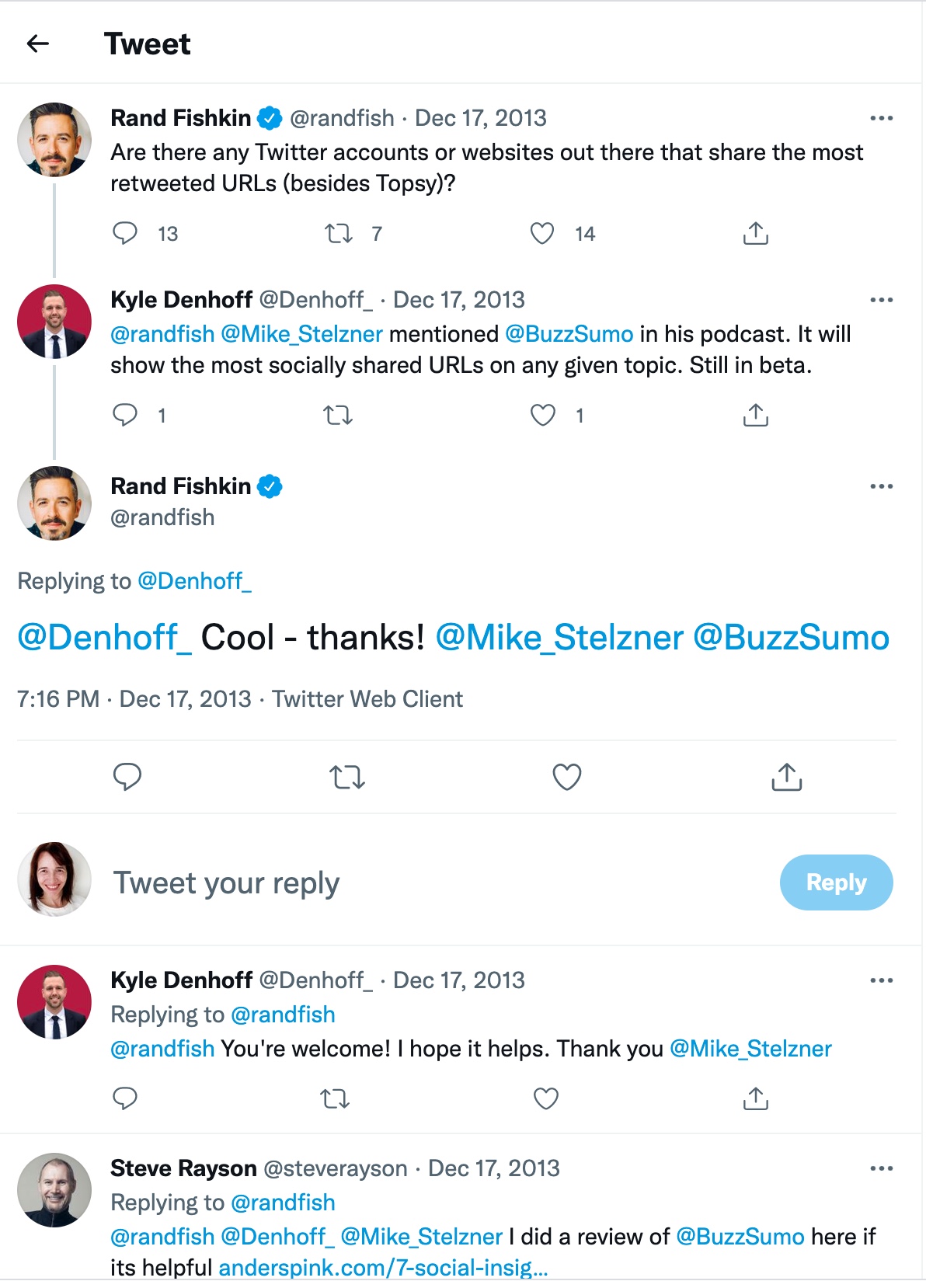 Word of mouth again!  And this is end of 2013. Their own blog was not so active yet and they were still in beta. After that tweet, Rand kept tweeting about them, suggesting new features, finding bugs to fix. A true advocate! Isn't this the best strategy to win the market? And he is an influencer. The next level of audience.

And look who’s commenting at the very end. Steve himself and by reading the comment it seems that he was not involved yet. By the way it is not possible to find that article anymore. But I believe this could also be the moment he realized BuzzSumo was going to be big and joining could be a great idea. In his blog post he writes: “I first met James & Henley in December 2013, just as the snowflakes started to fall in New York. We agreed to turn the early version of BuzzSumo, which they were developing in their spare time, into a business. We formed the company in March 2014, and during the year we all left our previous jobs to focus on BuzzSumo. We have no investors, I bootstrapped the business financially, and we launched our BuzzSumo Pro product in late September 2014.”
Timeline seems correct. And the agreement seems also clear, they had something that looked like a winning product, Steve had the money. Win Win.
‍
Steve says one thing that really stuck with me in his article: “Spend every dollar you have on creating a great product–not marketing. A great product will generate far more awareness through sharing and advocacy than any marketing spend. This approach is also far more sustainable as you may run out of marketing dollars.”

I think that’s exactly what their initial journey shows. It took them more or less a year to truly fly which is not a long time if you start from scratch. They focused on making sure their subscribers became their advocates. Their chosen distribution was basically an online “word of mouth” which worked crazy well because the need was there, the idea was solid, and they took enough time to beta test. I wouldn’t be surprised if they made the beta testers feel like part of the family. For sure they valued them and listened to them carefully because as Henley wrote in his article they knew their influence was strong. And the rest is history.

WHAT CAN WE LEARN FROM THIS STORY

1. Online word of mouth is a thing and it is possible.
2. You don't need a perfect product or a lot of money to make it work.
3. Partnership, whether with micro-influencers or other brands, is always a good idea. If you don't have a strong community to launch to then partnership is the next thing you want to try.
4. Beta test! This is a big opportunity to get to know your early users. They might turn into your best friends.
5.To make it happen you need to have clear who your target audience is and what value you bring to them. This will make it easier to approach and ask to try out your product in exchange of a review if they like it.
6. Your users' word is your bible when refining the product. Pay attention that I didn't say customers. I said users. The distinction is for another time, but build a strong relationship with your early users. They will be your best support inside and outside your environment.
7. Investing in marketing is important, but understanding the market you are entering is more important. Identify your consumers and learn to speak their language. Identify your competition and learn what sets you aside because this is the strength your users will be looking for.


Archeology of 0 to 1 is a special column of TILT where I regularly research the early history of famous products trying to summarise repeatable learnings.

‍
Thank you! Your submission has been received!
Oops! Something went wrong while submitting the form.
TILT is a newsletter that is sent biweekly. In each issue I share news on product strategy coupled with innovation, human experience, the right tech to support the right product. Anything helpful that I come across during my work and my daily life. Sign up!